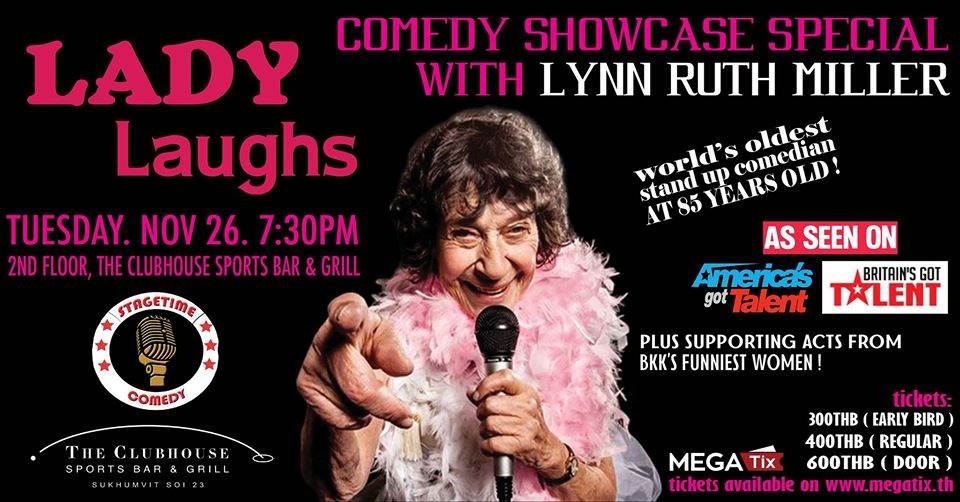 Get ready for the oldest comedian in the world at 85 years old, it's Lynn Ruth Miller from the USA! The Ohio native started her comedy career at 71. She made it to Las Vegas in America’s Got Talent, 2008, won People’s Choice in 2009 Branson Comedy Festival, the finals in Bill Word’s Funniest Female Contest 2009 and semi-finals in the SF International Comedy Competition, the top 100 in Britain’s Got Talent and won both nights of the Texas Burlesque Festival without taking off anything that matters.

She was the 2013 TO&ST winner for GRANNY’S GONE WILD: best cabaret Edinburgh Fringe. That show was performed at the Soho Theatre in London in March 2014. In August, she performed her fourth solo show NOT DEAD YET a compilation of stories and songs about her life, directed by Sarah Louise Young with songs written by Young and Michael Roulston to 4 and 5 star reviews.

Lynn performs stand-up comedy internationally and is a fixture at both the Brighton Fringe Festival and the Edinburgh International Fringe Festival . She hosted two television shows on Pacifica’s public access TV station, CH 26: WHAT’S HOT BETWEEN THE COVERS (an interview program) and PAINT WITH LYNN (a hands on art program) until 2014 when she decided to cross the ocean and take up residence in Brighton.

"This is a beautifully intimate show with a truly satisfying ending. Who knows what Miller will bring back to the festival next year, but I’m looking forward to it already." ★★★★ - Broadway Baby

"Lynn Ruth Miller packs a lot into her hour. She is a stand-and-deliver American comic in the good old-fashioned mold of Joan Rivers and Phyllis Diller. Possibly the most memorable show I’ve seen so far, the combined age of her entire audience added up to only a little more than that of the performer. But we were all laughing." - The Scotsman

"This woman is sharp, and in among the fun and schtick there are some killer lines. Ms Miller is a poster girl for growing old disgracefully and she looks to be enjoying every second.....you'll love Lynn Ruth." - The Scotsman

"Others may rage against the dying of the light; Miller – and you've got to love her for it – cranks up the limelight and turns on the mirrorball!" - The Guardian

Lady Laughs is a show with an "all female line up of comedians" from open mic, regular, and professional backgrounds.