The Night Crawlers of Manila: Photojournalism Against the Filipino War on Drugs 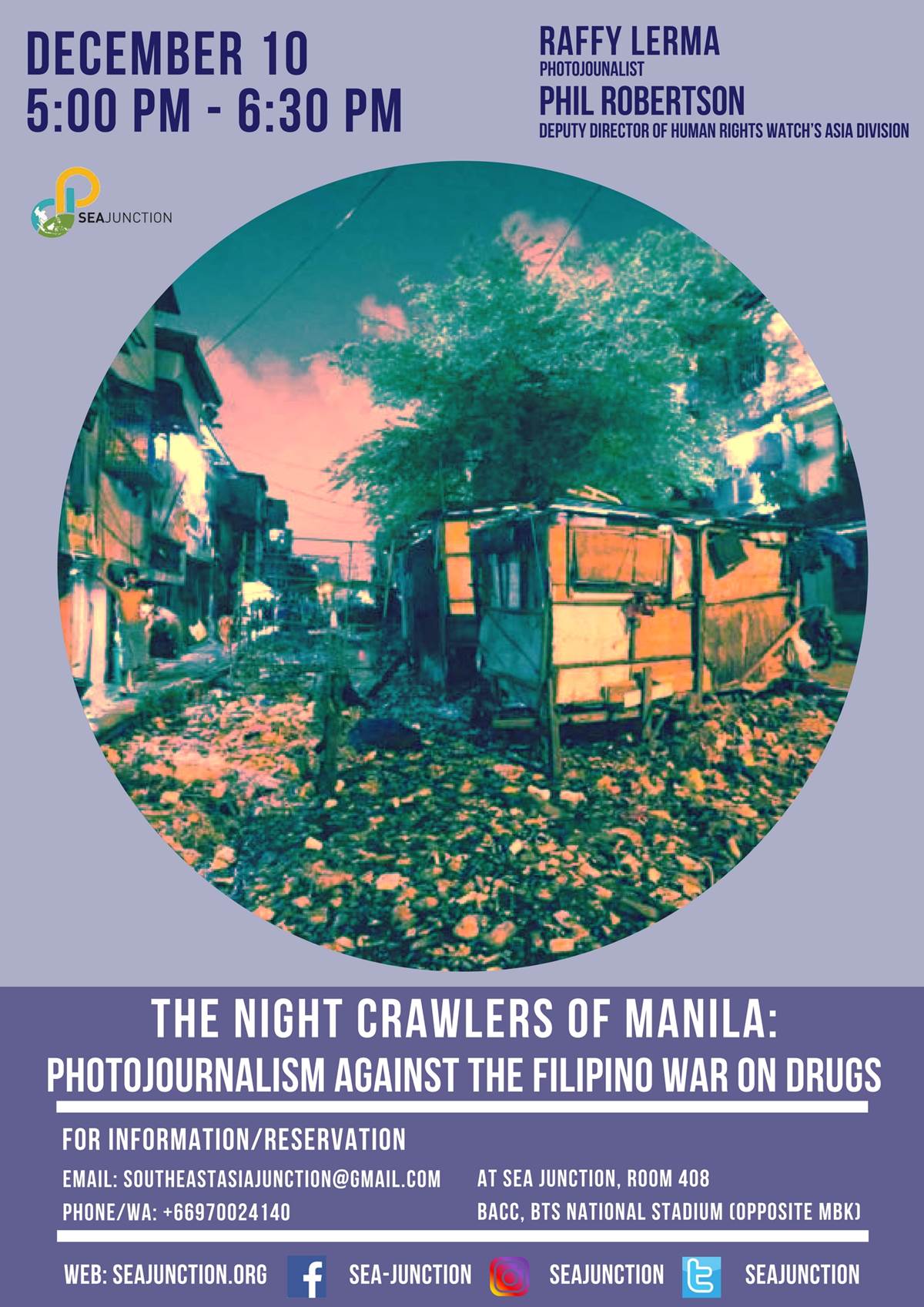 The Night Crawlers is an unofficial group of journalists, some working for media agencies, but mostly freelancers who cover the Philippine war on drugs. Since July 2016 they have done night shifts to document and report on extra-judiciary killings (EJKs) occurring in the streets of Metro Manila, the grief of their families, and the poverty and vulnerability they experienced.

Raffy Lerma’s presentation will provide illustration of the war on drugs and explain what is moving the Night Crawlers, stressing the role of photojournalism in providing evidences as well as giving a face to the victims and their lost lives beyond statistics. The ethics dilemma encountered and the emotional toll is taking on the group members will also be discussed.

Phil Robertson, deputy director of Human Rights Watch’s Asia division, will then reflect on the war on drugs and its disregard of human lives and rights. Lessons from similar policies in Thailand and other countries will also be shared to give food for thought.

This SEA Junction event complements an exhibition “The Night Shift”, which will start at FCCT on 1 December with a panel discussion by Raffy Lerna and other group members (see further://www.fccthai.com/items/2340.html ). It also marks Human Rights Day, which is observed every year on 10 December to highlight the day the United Nations General Assembly adopted, in 1948, the Universal Declaration of Human Rights.

Speaker Profile
Raffy Lerma began his career in photojournalism as a student of the College of Fine Arts in the University of the Philippines Diliman. He worked as a staff photographer for the Philippine Collegian, the official student publication of the university and later served as its Photo Editor in 2004. Lerma finished his Diploma in Photojournalism at the Konrad Adenauer Asian Center for Journalism at the Ateneo de Manila University. He was also the Philippine representative in Hanoi, Vietnam for World Press Photo – Asia Europe Foundation Forum for Young Photographers in 2004. For 12 years, he worked as a staff photographer for Philippine Daily Inquirer covering the daily news beat in Metro Manila. He has recently shifted into working independently to focus on his documentation of the Philippines’ war on drugs.
On the Night Crawlers see:
https://www.nytimes.com/2017/02/22/opinion/death-on-the-night-shift-in-dutertes-manila.html
http://rogue.ph/sona2017-raffy-lerma-hasnt-stopped-covering-war-drugs/

Commentator Profile
Phil Robertson, deputy director of Human Rights Watch’s Asia division, oversees the organization’s work throughout Asia, especially in Southeast Asia, North Korea and Japan. Prior to joining Human Rights Watch in 2009, he worked for more than a decade in Southeast Asia on human rights, labor rights, protection of migrant workers, and counter-human trafficking efforts with a variety of non-governmental organizations, international and regional trade union federations, and UN agencies. As program manager of the UN Inter-Agency Project on Human Trafficking (UNIAP), he oversaw the successful negotiation of the first regional inter-governmental agreement on human trafficking in the greater Mekong sub-region. Prior to UNIAP, he led the Mainland Southeast Asia office of the AFL-CIO’s Solidarity Center, working on trade union rights, democratic political reform, and rights of migrant workers, focusing primarily on Burma, Cambodia, Laos, Malaysia, and Thailand. A 1997 graduate of the Johns Hopkins School of Advanced International Studies, he is fluent in Thai and Lao.

About SEA Junction, OUR Venue on Southeast Asia
SEA Junction aims to foster understanding and appreciation of Southeast Asia in all its socio-cultural dimensions –from arts and lifestyles to economy and development. Conveniently located at Room 408 of the Bangkok Arts and Culture Centre or BACC (across MBK, BTS National Stadium) SEA junction facilitates public access to knowledge resources and exchanges among students, practitioners and Southeast Asia lovers. For more information see www.seajunction.org and join the Facebook group https://www.facebook.com/groups/1693055870976440/