“All of My Body Was Pain”: Report Discussion by Phil Robertson 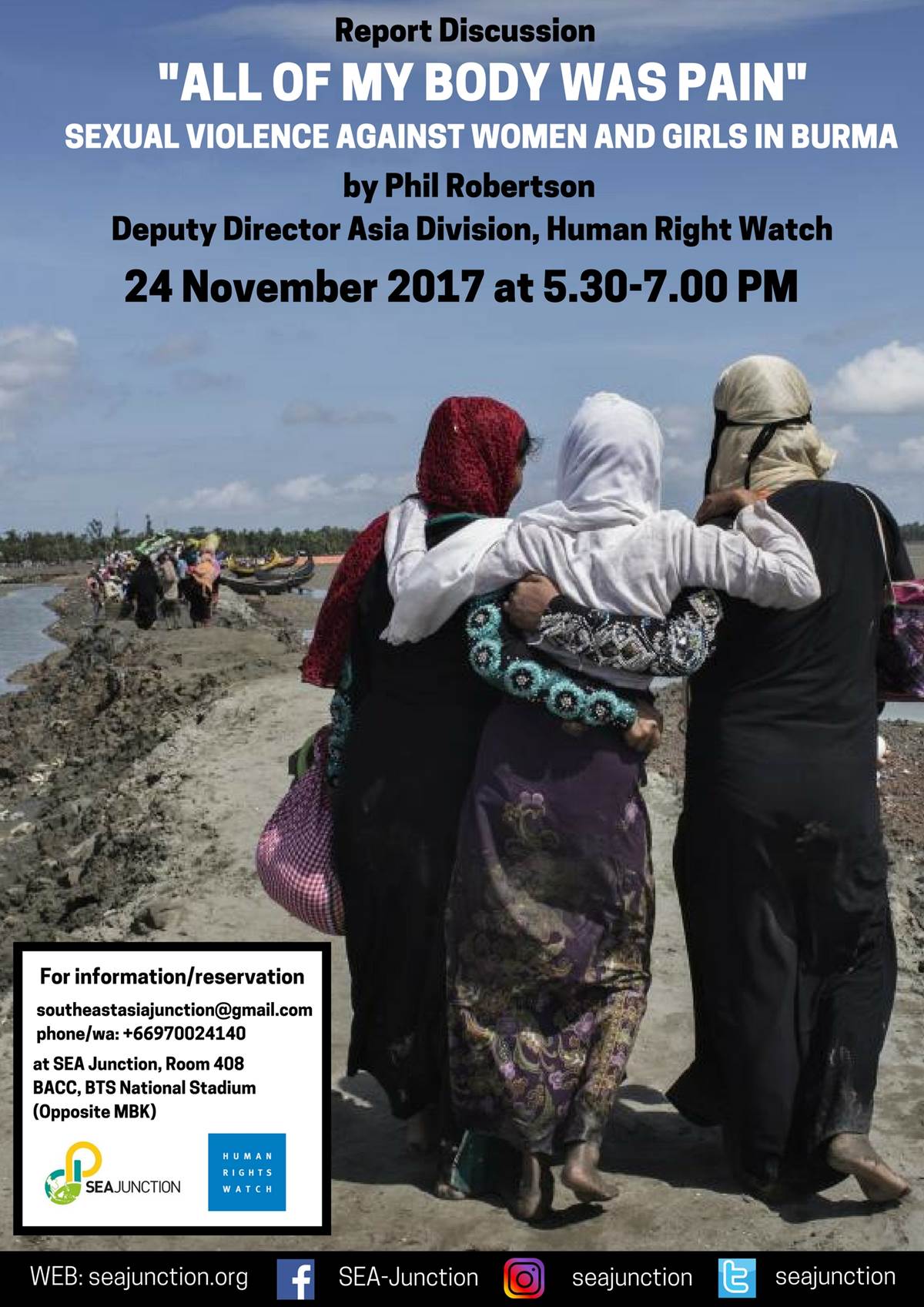 On 24 November 2017 at 5.30-7 PM at SEA Junction, Phil Robertson, the Deputy Director of Human Rights Watch (HRW)’s Asia Division, will discuss the recently launched report “All of My Body Was Pain: Sexual Violence Against Women and Girls in Burma.

The context of the report is the latest attacks against Rohingyas in Rakhine State, which were launched on 25 August 2017 in retaliation for the raids on 30 police posts and an army base allegedly by the Arakan Rohingya Salvation Army (ARSA). The large-scale destruction of Rohingya villages under the guise of military counter-insurgency operations has driven the population across the border into Cox’s Bazar, Bangladesh. Persecution is of such intensity and scale that is has become one of the most serious humanitarian crises in the world today and the most serious in Southeast Asia. An estimated 615,500 Rohingya have joined other refugees from previous waves bringing the total to an estimated 917,500 Rohingya refugees in Bangladesh who are traumatized and live in extremely difficult conditions with glim hope of a better future (adapted from ISCG Situation Report 12 Nov 2017

Although sex and age segregated numbers are still lacking, it has been repeatedly observed that the majority of the refugees are women and children. From their stories and from medical examination in the camps, it is becoming clear that rape has once more been used as a tool of war. Women groups in Myanmar have repeatedly reported state violence experienced by minority groups, ranging from molestation to gang rape. Now, UN medics in refugee camps have found that this is also the case for Rohingya with “dozens of women with injuries consistent with violent sexual attacks”

To expose these crimes against women and humanity, HRW interviewed 52 Rohingya women and girls who had fled to Bangladesh, including 29 rape survivors, 3 of them girls under 18, as well as 19 representatives of humanitarian organizations, United Nations agencies, and the Bangladeshi government. The rape survivors came from 19 villages in Rakhine State and were raped both during major attacks on villages and in the weeks prior to these attacks after repeated harassment. All, but one, were gang raped.

At the SEA Junction event, Phil Robertson will explain the current situation and the report’s findings, and discuss next steps for stopping the violence, helping the survivors and their families, and holding the perpetrators accountable. He will also show a video produced by Human Rights Watch on this same issue

His presentation will once more underscore that “violence against women and girls is one of the most widespread, persistent and devastating human rights violations” and the need to subscribe to the call “Leave no one behind: end violence against women and girls” of the 16 Days of Activism against Gender-Based Violence campaign from 25th November to 10th December, which is Human Rights Day.

The activity further complements the month-long exhibition “Shift Maps” which can be seen at our venue until 4 December as part of the series on movements of people in Southeast Asia entitled ASEAN People in Flux, which is organized by SEA Junction in collaboration with the Heinrich Boll Stiftung Southeast Asia. The exhibition highlights the personal live histories of refugees and migrants living in Bangkok, including Burmese, as written and illustrated by them on palm leaf manuscripts made from the Talipot Palm, also known as the ‘Shadow Palm’ (Corypha umbraculifera; Thai: Bai Larn).

Phil Robertson, deputy director of Human Rights Watch’s Asia division, oversees the organization’s work throughout Asia, especially in Southeast Asia, North Korea and Japan. Prior to joining Human Rights Watch in 2009, he worked for more than a decade in Southeast Asia on human rights, labor rights, protection of migrant workers, and counter-human trafficking efforts with a variety of non-governmental organizations, international and regional trade union federations, and UN agencies. As program manager of the UN Inter-Agency Project on Human Trafficking (UNIAP), he oversaw the successful negotiation of the first regional inter-governmental agreement on human trafficking in the greater Mekong sub-region. Prior to UNIAP, he led the Mainland Southeast Asia office of the AFL-CIO’s Solidarity Center, working on trade union rights, democratic political reform, and rights of migrant workers, focusing primarily on Burma, Cambodia, Laos, Malaysia, and Thailand. A 1997 graduate of the Johns Hopkins School of Advanced International Studies, he is fluent in Thai and Lao.

For information/reservation for our events please

About SEA Junction, OUR Venue on Southeast Asia

SEA Junction aims to foster understanding and appreciation of Southeast Asia in all its socio-cultural dimensions –from arts and lifestyles to economy and development. Conveniently located at Room 408 of the Bangkok Arts and Culture Centre or BACC (across MBK, BTS National Stadium) SEA junction facilitates public access to knowledge resources and exchanges among students, practitioners and Southeast Asia lovers. For more information see www.seajunction.org