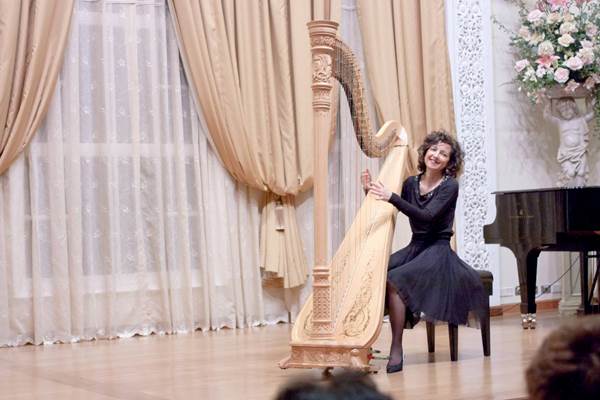 Proceeds towards the Gift of Life Foundation to help needy blood disease patients in Thailand.

She was born in Rovigo ( Italy ) in 1959, where she received her first musical training. She completed her schooling at the Conservatory “ B. Marcello “in Venice where she took her First Degree in Harp.
Following this, she took a three year course in advanced harp studies at the “ Accademia of S.Cecilia” in Rome.
She also attended Master Classes in France with famous professors such as J. Borot, P. Jamet, and S. Mildonian. She has performed as a soloist with numerous Chamber Orchestras and has divided her career between solo performances and chamber ensemble. She has taken part in the recording of “ Concerto “ by the composer B. Maderna - a piece for 2 pf, 2 harp,celesta and 4 percussion instruments. In addiction, she has been also involved in several radio and video productions.
Since marking her debut, she has always been interested in expanding and increasing the repertoire for two harps. Her recitals span a very varied musical repertoire, ranging from classical compositions from the XVII° century right up to
contemporary masterpieces.
She has also received several awards and accolades for her performances.
She has been teaching since 1981 and she is now currently Professor of Harp at the Conservatory of Music in Perugia