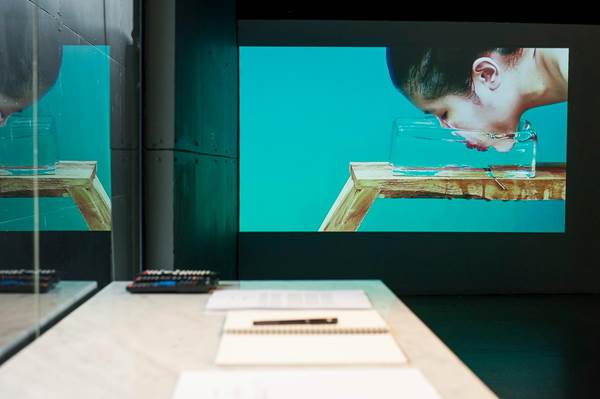 Vatanajyankur’s exploration of everyday and domestic work is particularly telling of her Thai homeland. A place where, for many, daily chores aren’t always assisted by electronic contraptions or white goods but are time-consuming, physically exhausting, and often the task of women. The videos’ happy, day-glow colours, dark humour and undercurrents of violence, however, bring a universality and contemporary currency to the historical trajectory of feminist art. It is telling, for instance, that she describes her performances as “meditation postures”, when such gruelling tests of resilience and fear are quite the opposite of what we might think of now as zen. But, for Vatanajyankur, extreme physical endurance offers a way to free herself from her mind: a mechanism to lose her sense of being. This deliberate objectification, she says, turns her body into sculpture.

Exploring possibility one might find while dealing with one’s body is the essence of Vatanajyankur’s work. Her experimentation with domestic objects is rooted from the 17th century painting that would often pose female bodies as still-life subjects within domestic spaces. From this origination, through different mediums she crosses beyond boundary of physical and psychological power, and the contrast. While the female corporeality remains the core subject, another aspect of the work reveals. As the performative experimenting starts, the movement reiterates in continuous flux, strength becomes weakness, weakness forms strength, as one disappears another emerges, alternating stages of various selves. Time is relevant as a test for endurance and as duration to communicate.