TJAŠA IRIS, Gardens of Eden - Paintings from a New Dimension 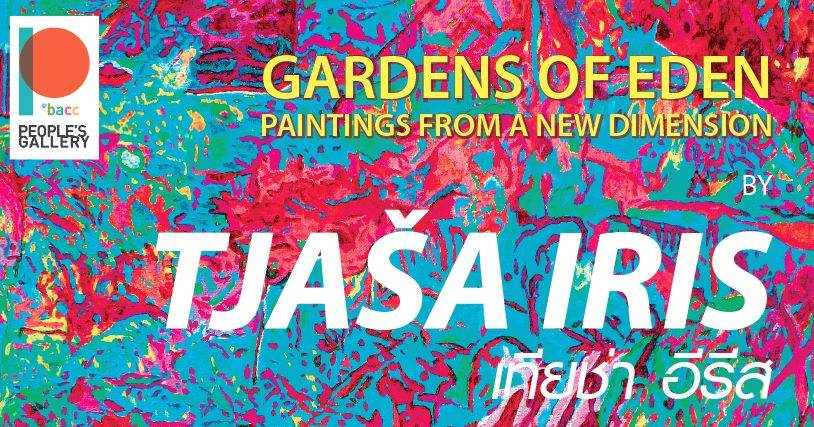 GARDENS OF EDEN - PAINTINGS FROM A NEW DIMENSION

Tjaša Iris is Slovenian-born (1968) international artist. She spent the years 2009 - 2017 traveling / creating / living / exhibiting in Southeast Asia. Most of her time she spent in Bangkok and specially in Chiang Mai that she had as a base for over 6 years. The artworks (paintings, photographs and mixed media works) on show in this exhibition were mostly created in Thailand with some exceptions that were created in other countries of Southeast Asia. She spend a lot of her creative time in the Kings’s Gardens in Chiang Mai at Bhubing Palace. Iris is known as colorist with her roots in European Expressionism.

Her main subject since the last 15 years is gardens in Europe and Southeast Asia, depicting them by painting their bright light in vivid colors. Since she came for the first time to Thailand 7 years ago, her new paintings have a new spaciousness. Things appear and disappear in a new reality, a new dimension. Paintings are meditations about the subjects as: the eternal monumental, recycled sunlight, the sound of the sun, non space, new dimensions… She continues exploring colour and its emotional and expressive qualities. Her colours are used freely and vibrantly. The paintings vibrate with the contrasts of warm and cold, light and dark, bright and dull.

She is now more then ever an avid traveller. She visited and lived in Thailand, Singapore, Indonesia, Malaysia, Myanmar, Cambodia and Laos these last 8 years. She says that the explosive energy of the Southeast Asia is making her artworks even more vibrant. She is also studying physics a lot, the new studies about what the scientists have to say about the 5th, 6th, 7th … dimension. As well as finding inspiration for my new paintings by listening to the contemporary classical music. One of her main inspirations is atonal music. She had a book published this spring (available at Amazon.com) with the title: TJAŠA IRIS - 8 WINTERS IN SOUTHEAST ASIA, A EUROPEAN UNDER THE TROPICS. The photographs from the book are on shown for the first time in Asia here at her BACC exhibition with titles: "The New Life of Flowers" – “Flowers from Out of Space” and "The New Life of Garden Sculptures". Her photography is also very colorful. Further painted on by computer it appears somewhat half way between a classical photography and her painting.