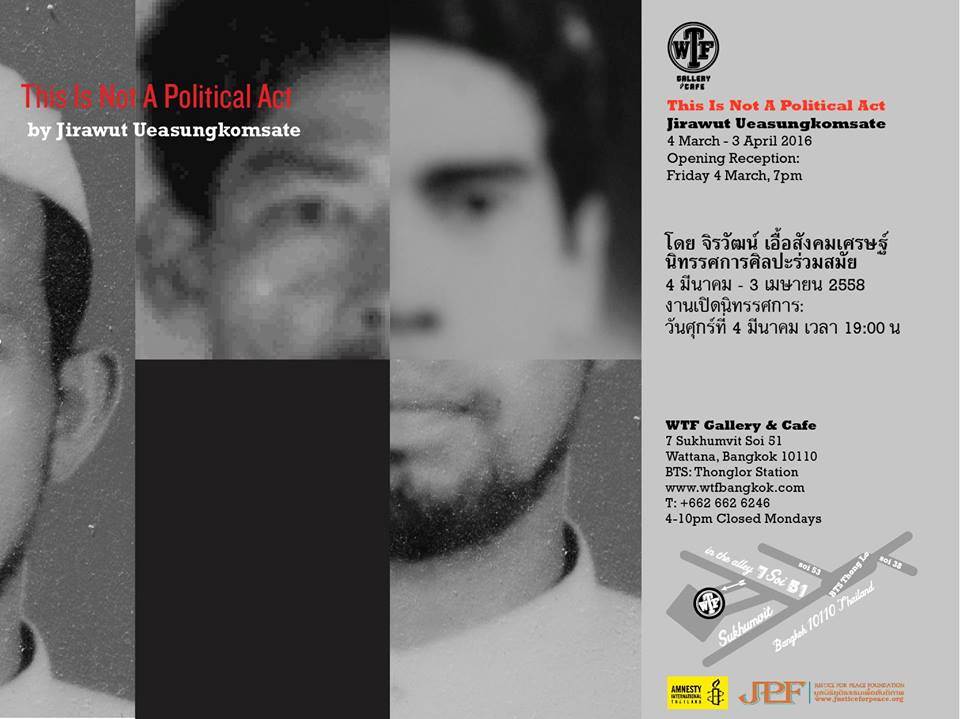 WTF gallery is pleased to announce the contemporary art exhibition “This Is Not A Political Act” by Jirawut Ueasungkomsate from 4 March - 3 April 2016.

This Is Not A Political Act is Jirawut’s first solo exhibition in Bangkok. The exhibition aims to raise questions about how art can be perceived and what influence restrictions from a highly nervous society and repressive power structure have on the dialogue between artist and the viewers.

Intrigued by an atmosphere where discussion and expression in art and culture are driven into dark corners, and ambiguities proliferate until it is almost impossible to determine what is being said, but where for the same reason everything seems obscurely freighted with meaning – where sandwiches and t-shirt sleeves somehow speak louder than words – Jirawut has decided to turn a typical “white cube” gallery into an uncomfortable space that more aptly bodies forth the circumstances of its creation than the even bright light of reason that viewers have come to expect.

To guide them through an almost pitch-dark room, viewers will be given a torch to see the work, which consists of 15 low-resolution portraits of people who have gone missing — most of them unknown to the public. Each portrait is accompanied by a dimly lit phrase to help viewers decode the story of each individual insofar as it can be decoded, leaving a generous margin for their imagination, suspicions and prejudices to bloom in the murk.

On the opening night at 8pm, there will be a special ceremonial event attended by those affected by and connected to some of the figures portrayed in the exhibition. We encourage all participants to arrive on time.

Jirawut Ueasungkomsate (b. 1986, Bangkok, Thailand) is a filmmaker and video artist with an MA degree in Experimental Film from Kingston University, United Kingdom. He obtained his BA in Archaeology and Anthropology from Silpakorn University in Thailand and also achieved BTEC HNC in Fine Art from Kensington and Chelsea College. His work has been exhibited in several group shows in galleries in the UK and Thailand including ‘Ghost Nowhere’, SEA ArtsFest 2013, London, UK and ‘Distance, between the journeys’, Tadu Contemporary Art, BKK, Thailand.

The exhibition is made possible by Amnesty International and Justice for Peace Foundation.