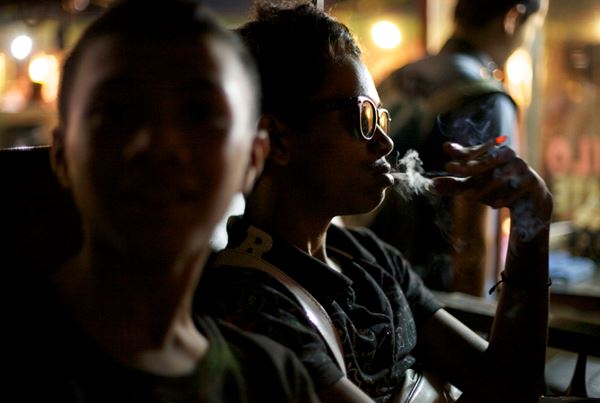 Much has been shared on the political violence of 2010, but Harit Srikhao’s unique photographic perspective, with its on-rushing, vibrant immediacy, is born of direct impact. Barely 15 then, he spent a long, emotionally-charged day trying to get home from school. Because of the shooting around Zeer Rangsit shopping mall near his house, buses were not running.  Deciding to spend the night at a friend’s house, a 10-km walk away, he trudged on through the descending night, passing gangs of teenage runaways, prostitutes, packs of stray dogs. Yes, he got lost; it was a nightmare that continues to plague his sleep to this day.

Two years on, he returned to the route, retracing his steps, compiling a photographic record which he calls his ‘Red Dream’. The result is powerful, saturated with intense degrees of dread and fear, a questioning uncertainty towards everything being encountered; the viewer gets caught up in his nightmarish adventures.

Harit is serious, mature for his age. The first among his friends to know what he is going to be—not a doctor, as he once dreamed, but a photographer—Harit joined a workshop at the Angkor Photo Festival in Siemreap in 2011. This resulted in the spell-binding series, ‘Black Rites’: street kids in Cambodia from the perspective of an equal, not through the eyes of an adult.  There is no stigmatizing, no judgement; only understanding. It is as if they are actually self-portraits through which his soul is gazing out from the faces of these street children.

As he says: “The way I see it, we are the victims of the problem, the tell-tale proof that this society is in trouble.”

Kathmandu Photo Gallery is proud to present the work of an artist from a brand-new generation: Harit Srikhao, 19 years old, and his ‘Red Dream’ and ‘Black Rites’, two series born of different contexts which bleed seamlessly into one.

Currently Harit is studying photography at the School of Architecture, King Mongkut’s Institute of Technology at Lard Krabang.