Radiation: Art and Queer Ideas from Bangkok and Manila

Bangkok, Thailand – The Art Center of Chulalongkorn University is very pleased to announce an ambitious exhibition of visual art which was initially mounted with the Department of Avant-Garde Clichés (DAGC) in Manila during 2012. DAGC was an artist-led curatorial group and gallery. RADIATION: Art and Queer Ideas from Bangkok and Manila has now been extended and includes twenty-five artists, including a special guest list.

RADIATION explores ideas, and possibilities, of ‘queer’ as they can echo and translate across national boundaries, be it in derogatory or affirmative ways. Acknowledging overlapping histories, contextual antagonisms and potential futures between our two cities, the title denotes an outward movement from a source and also infection; in this exhibition, mutual infection[s]. The artworks play with complex notions of the masculine and feminine – rhetorical, provocative, subversive – across themes that include the dynamics of eroticized space, corporeal fascination and repulsion; and the embrace of alienated forms, methods and images.

Un-comparing artists from Bangkok and Manila most immediately rebuffs rational engagement. Instead, the arbitrary, haphazard and possibly dangerous is valued. To discover differences is at the core of the very idea of queer. RADIATION essentially aims to explode stereotypical connections between these two famous Asian capitals, providing correspondences and clashes that less defy such connections than usurp them. Moreover, alternative or parallel understandings to ‘official’ and dominant theories of what queer can mean will be discerned. 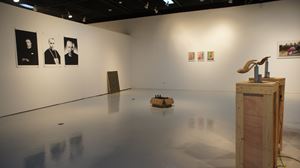