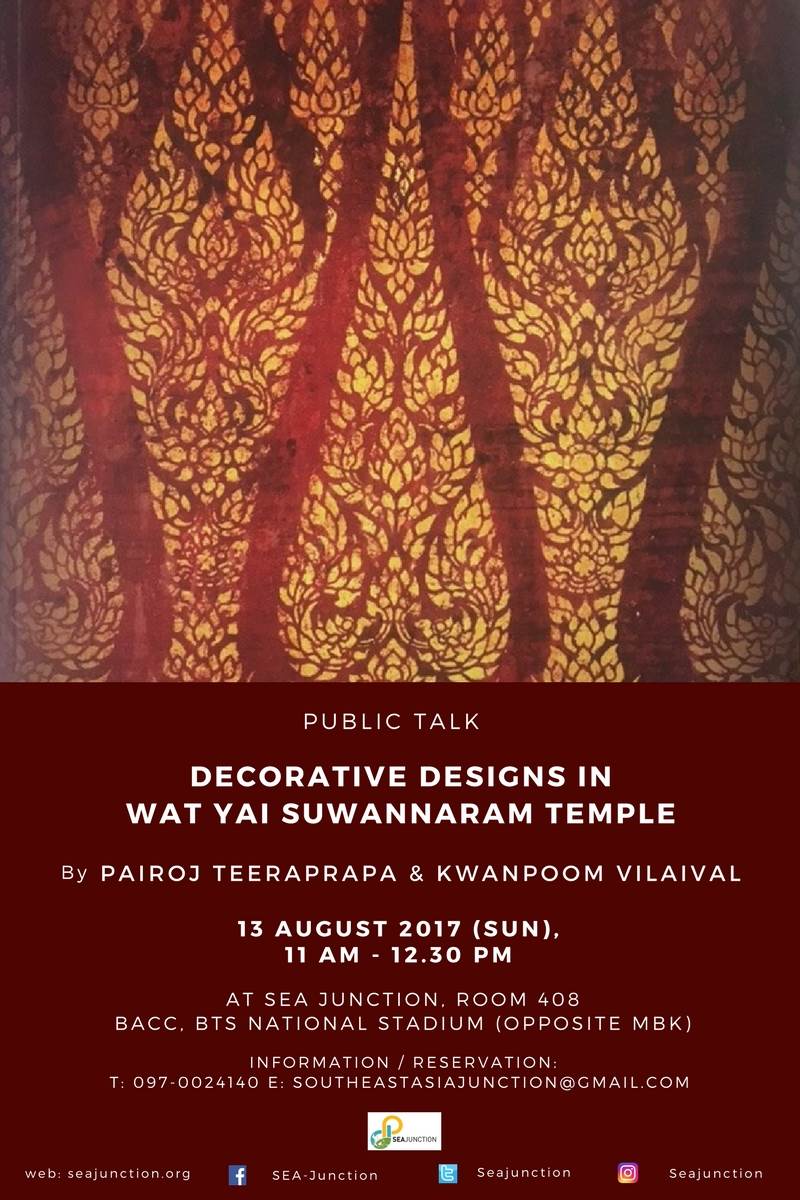 The morning lecture by two graphic experts will highlight the contemporaneity of decorative motifs and designs of the late Ayutthaya period in Wat Yai Suwannaram Temple in Petchaburi Province. According to the description by the Thai Tourism Authority: “the temple, featuring a windowless main shrine hall, houses magnificent 300-year-old murals of mythical angels. Its Sala Kanprian (multi-purpose hall), which was once located in Ayutthaya’s Grand Palace, was entirely built of teakwood and decorated with fine woodwork especially at the door panels. There is also a preaching throne with magnificently elaborated Bangkok style woodcarvings and gold gilt works”.[1]

This renown temple houses the most interesting collection of stencil patterns done with paper-block printing in Thailand. This technique is common among artisans all over the world and it has been used thousand years ago in China and at least half a millennium in Japan. The talk discusses the patterns of Wat Yai Suwannaram Temple and how they remain a source of creativity to these days. In a related afternoon workshop participants will learn to apply those traditional motifs with silk-screen block printing techniques to modern products such as T-shirts and cotton bags.

The speakers are two graphic designers deriving inspiration from Thai art and culture:

Pairoj Teeraprapa attained his bachelor and Master degree in Visual Communication Design at Silpakorn University, Thailand. He started his work at SAM NOH design studio and later became art director for an advertising agency. Today he is a freelance designer and part-time tutor for many universities in Applied Thai Art. He has won the 2015 Silapakorn Artist Award for Graphic Design and is active in many socially-oriented organizations including as one of the founders of Thai Inspiration Group (Rang Bun Darn Thai) which aims to promote appreciation of Thailand art through graphic design and as the co-funder of Siam Type Font Foundry a crowdfunding project by a collaborative group of Thai type designers to create and distribute their fonts for an accessible price.

Kwanpoom Vilaiwan is a student of Pairoj Teeraprapa and has also studied with M.L. Chiratorn Chirapravati and with Prateep Sawangsuk at Siam Sarm Tri Schools.  He founded Artizaan Press and has edited more than 10 books, and 100 pieces of publication including, academic journals, chart books, scrapbooks and greeting cards from the work of famous Thai artists. His design work is both for commercial and non-profit aims including for supporting HIV patients from the Thai Red Cross, and for Bangkok National Museum, and Museum Siam. He gives workshops on silk-screen printing on cotton using gold stencil patterns inspired by Wat Yai Suwannaram temple. In his design work, the dominant color is the ‘Indian Red’ from soil pigment, which has been used since prehistoric times in Petchaburi province, including in the temple.  Kwanpoom Vilaiwan has also written and printed books on the temple’s ornaments, which will be discussed in this talk.

The screening is free, but donations are welcome.