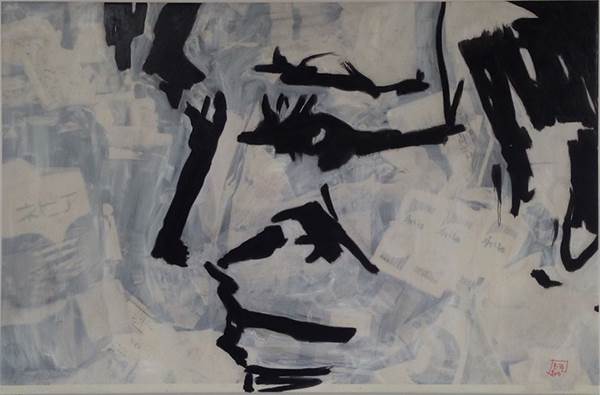 Opening Reception is on Thuesday, 18 June from 5:00pm

Bruno Tanquerel’s imagery is a celebration of fantasy. Humor and sadness coincide in his assemblages, a mixture of familiarity and imagination. This art bears eloquent witness to Tanquerel’s life experience and to his sensitive observation of human comedy. His unique iconography may be understood as a form of poetic metaphor expressed with a system of private signs. This is an art which is technically inventive. Tanquerel never accepts or recognizes the formal limitations of anything, His aesthetic is a pastiche of styles in which categories become blurred. His fusion of abstraction and figuration result in a gesturing of line whichtransforms the ordinary and everyday into dramatic theatricality.

Building on his French heritage, Tanquerel has created a vitalized theology in which intellect and wit meet and coalesce in the realm of fantasy. Living most of his adult life in Paris, Tanquerel has been witness first hand to the art of great masters. His curious expression evinces the idiom of the enigmatic, intellectual Marcel Duchamp, Duchamp’s pioneering Dada spirit which associates art with non-art, his confusing the traditional hierarchy artistic values, producing objects from every materials, and his insistence on challenging the audience’s preconceptions about art and taste were particularly influential in shaping the conceptions of Tanquerel. Many of these characteristics surface in his art which, too, is filled with contradiction and a sense of defiance. Punning becomes a critical device for releasing the emotional content of the younger artist’s work. However the nihilistic impulse which underlies the master’s disconcerting values is absent in the philosophical thinking of Bruno Tanquerel. It would be wrong to associate his aesthetic with the Neo-Dada art which builds on a nihilist foundation and has been passed down to younger generations through the output of Klein and Warhol. A closer affinity can be drawn with the art of Pual Klee who endeavored to translate his visual meanings of an isolated and detached society through highly whimsical, deliberate child-like, raw hieroglyphs. Tanquerel, like Klee, searches for a means to represent essences about human relationships through his compelling abstract pictorial expressive lines and inventive spaces.

Unlike the sinister farce which prevails in much contemporary art, a childlike innocence is felt in this compelling and original body of work. This characteristic should not be faulted or mistaken for simple art, for here is and art which evinces a high degree of intelligence and sophistication, a paradoxical quality. Tanquerel opts to celebrate human relationships and the relevance of small intimate encounters instead of focusing on mass society with its psychological isolation and its complex political, economical, and architectural structures. His imagination seeks positive answers at a time when man’s tragic predicament is explicitly spot-lighted.