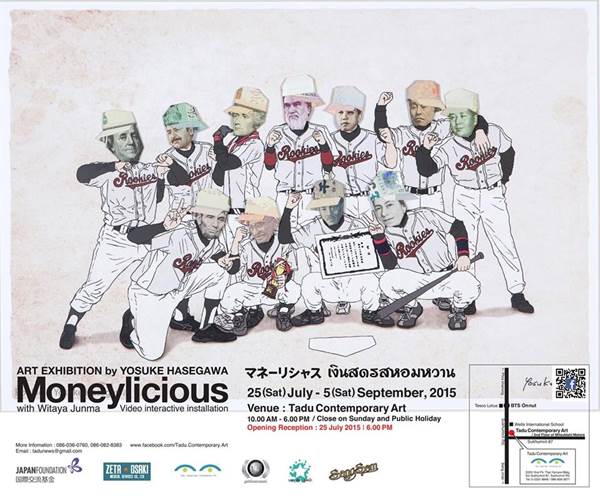 The exhibition will feature Hasegawa’s artwork made from banknotes and an interactive video installation by Wittaya Junma.

Banknotes were originally a goods itself with common value such as gold and jewelry, and the bill was only a temporally receipt of their precious metals. However, the receipt was, then the name of the authenticity “Credit”, and valued same as the precious metal. This very same and fictional value system is currently used to manage the world economy.

Artist:
" I began folding banknotes back in 2006. I remember that I was folding bills without any particular intention of my mind, but I suddenly realized that the greats printed on these banknotes started looking like wearing a baseball cap! The personalities of dignified greats were completely changed, and they became really comical character figure! I also realized that the banknote has completely lost its original monetary value.

Losing the value of banknotes and changing the personality of greats were beginning of my Monelious art. The moment that it becomes no longer considered as money by my folding art, I sensed that world history has been continuously struggled by the mercy of the Money. There have been plenty incidents that banknotes have diminished their currency value over a night in the past. They became only trash paper.

The world have been confronted by the booming war business inflating money values, world nature continuously get destroyed by industrial achievements, medical science never progress fast enough to cure the diseases, unbalanced mass production & mass consumption volume paralyze our daily life, risking our human environment by building more nuclear power plants, however, we still considered them as our top priority. I feel that we are losing our true mission of life.

Is it acceptable to our life standard? The illusion of peaceful life has been created by the elite business that only focusing on materialistic value. Our people may have been tricked?

I have been living here in Bangkok for a year now, and witnessing real-estate development and globalization in Bangkok is increasing their progress speed much faster than ever.

But many poor have been left behind and isolated from our society. The gap between the glamorous rich society and the poor are only getting greater.

I have been also confronted by the reality of life in Bangkok, and the art of Moneylious is certainly opening my new chapters. I wonder if money could create genuine happiness? Or will you make misfortune or tragedy? I want to continue to ask myself very same question.

The ideal of true value that we can trust forever, I want to search for."