SI-LA-GI (born.1949) invited other artists in 1984 as a first occasion to cooperate in a transformative spatial work. In 2003 he continued the visual dialogue with street art, Buddhist grand masters and other engaging creative people in the form of collective paintings. He learned to know Tawan Wattuya (born.1973) in 2007 via the Tang Contemporary Art Bangkok and their first large size cooperative paintings were made as part of the project "Good & Bad" in the beginning of 2008. The very special process of their cooperation has continued since then and the present project, their fourth, has been the most intense and absorbing. Occasionally they do invite other Thai artists to participate in these visual discourses which are not only the individual artists’s exchange of ideas manifested in pictures, but also forums for cultural, aesthetic and ideological - non-verbal - communication between East and West.

There is no lead concept or organizing principle in these collective works. There is no plan, verification, conference here, only the visual communication and reaction to each others painted proposals. Individual decisions determine if one is to paint over parts or the whole of the other's work. The added - drawn or painted - reactions continuously and fundamentally change or redirect not only the picture's form and expression, but its content as well. The differences in cultural background and age do not post barriers - the uninhibited freedom and courage of the two artists override that. They continue to exceed not just the aesthetic, stylistic and ideological rules and limitations, but also themselves. As the artists give up their attachment to the conceptual conformation/destruction of the self, they manifest the highest possible human aim, the transcendence of the "I".

They don't aspire to fulfill any expectations, because they do not run an established course - their curiosity leads them to "terra incognita", the unknown territories, there they want to stroll and discover. The grade of liberty that they are offering to viewers and collectors is the result of many years of consequent labor. 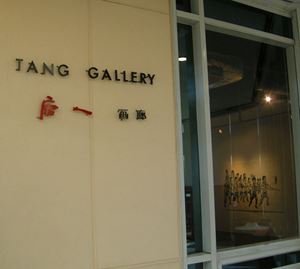