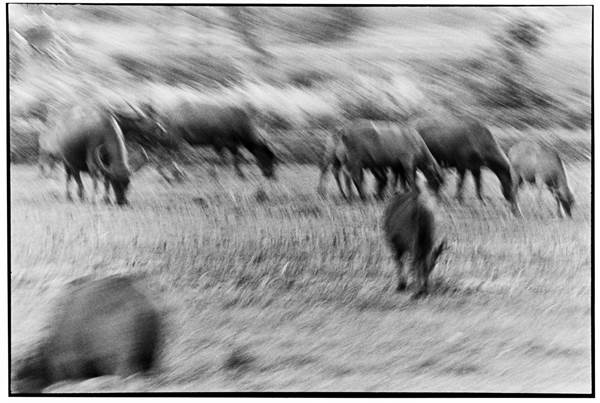 "Game: part I" A photographic exhibition by Liam Morgan

Using a single piece of equipment, half hunting-rifle and half camera, Morgan rides open-air trains around rural Thailand shooting at each buffalo he passes.
In this first installment of Game, this exhibition of hand-printed black-and-white photographs, the act of shooting becomes as important as the resulting imagery; each picture is informed by the system in which it was created.
It can be taken as self-reflexive: allegorical of the medium as well as dealing with temporal and compositional concerns in the still image. But the specific symbolism points outwards, to collective human myths and the conflict inherent there. To the Us and to the Them.
The narrative builds on the given symbolic connotations of the buffalo and the shooting of that animal from trains. Accordingly, the work deals with notions of power and violence in Morgan’s (semi-) constructed idyll.

Liam Morgan (b. 1982) is a Canadian artist who has made Thailand his home since 2002. His practice includes installation, lighting, video and photographic work.