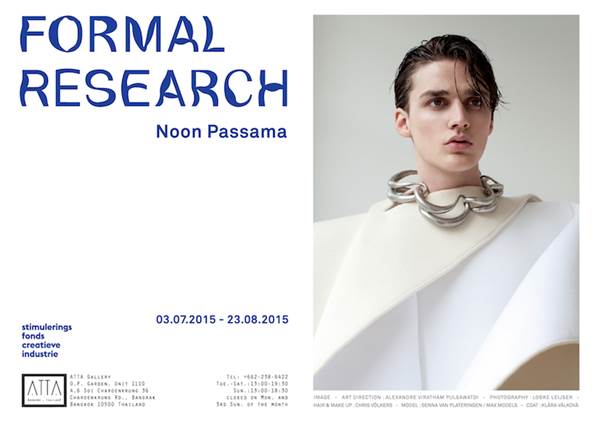 Noon Passama, an award winning Thai artist, will debut the second part of her Formal Research series at ATTA Gallery.
This is Noon's first solo exhibition in her hometown, Bangkok.

Formal Research focuses on one classical type of jewellery: the chain.
The project is mainly about the form of each connecting chain unit.
- It is like composing a sentence out of a transforming typeface. -
For the exhibition at ATTA Gallery, Noon Passama will present for the first time hand- sculpted bracelets as one-off editions.
The bracelets are new developments derived from Formal Research necklaces (2015).
The group of works was made under the following considerations: dividing / sequencing / sizing / layering.
The artist does not edit the outcomes and will present them as they are. The try-outs are the finals and vice versa.

Born and educated in Thailand, Noon Passama moved to the Netherlands in 2007, where she graduated in Jewellery Design from Gerrit Rietveld Academie in 2010. She won both the Rietveld Prize from the academy and Marzee Prize of Galerie Marzee in Nijmegen, The Netherlands. Right after her graduation, Passama had her solo presentation at the opening of Galerie Ra’s new space. Besides her own work, she collaborates with other creatives. Her collaboration with fashion designers of Capara won the Emerging Artist Award 2012 granted by the Art Jewelry Forum. In 2014 Noon Passama was one of three recipients of the prestigious Herbert Hoffmann Prize, dubbing the Oscars of the contemporary jewelry world, in Munich, Germany. She is the first Thai artist to have received both the Art Jewelry Forum’s Emerging Artist Award and the Herbert Hoffmann Prize. She has gained recognition and a strong group of followers and collectors in Europe, the Americas and Australia. Noon Passama is no doubt one of the most internationally sought-after promising young talents in the contemporary jewelry field at the moment