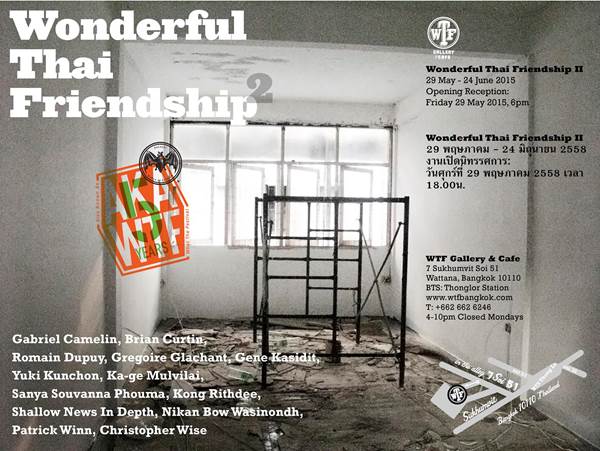 Over the past 5 years, WTF Cafe & Gallery has operated on the core belief that art and artists matter profoundly to our society, and can meaningfully contribute to shaping civic dialogue and creating a better society. We support artists in their efforts to move the needle of social justice and to reveal new ways of looking at and understanding our world. As a result, our commissions range from the wondrous and uplifting to the unnerving and provocative.

In the last couple years, we’ve witnessed drastic changes in our country. The last coup has created more conflicts rather than solving them, and created confusion both even within and among groups who may have felt they had a stake in bringing this change about, because once the ‘good people’ were in charge, the violence and political shambles would magically come to an end.

At the height of the protests that preceded the coup back in 2014, WTF gallery curated the exhibition ‘Conflicted Visions”, aiming to create dialogue among the polarised artists and intellectuals who felt the urge to expressed their feelings through art – be it by criticising official policy, using art as a propaganda, or reflecting their confusion, anger, pride and doubt. While “Conflicted Visions” could hardly hope to singlehandedly unblock the dialogue channels between different ideologies, it did raise the question whether we can ever actually have disagreements over fundamental beliefs and ideologies without becoming overwrought. “Conflicted Visions is about reaching beyond prejudices” (Bangkok Post, 9/04/14).

A couple of months later, the military once again seized power openly and formed an authoritarian government who’s chief purpose is to reduce the country once again to a single vision. By doing that it has reduced the concept of human rights and freedom of speech to almost nothing, and this attitude has spilt over even into areas that have nothing to do with political conflict such as simple natural justice or compassion.

In view of the arbitrary detentions and intimidation that followed, the media, academic and art worlds have been virtually silenced with only a few brave non-visual artists or academics fighting relentlessly with the authorities.

Because many artists are silent, WTF tried to think of new ways of prodding the community out of its current stagnation and ennui – and turned to people who are not by profession artists at all for fresh eyes and a fresh perspective. This is not simply because we are giving up or abandoning the artists who have been shackled by authoritarianism, but because we would like to explore the boundaries of art – whether it can express an outright rejection of conventionally defined criteria as a means of defining what art is, and isn’t, and if it is still art if it is done by non-artists who understand themselves as such.

We invited 13 non-artists to create their art under the theme of “Wonderful Thai Friendship II”. This was the theme that inaugurated WTF gallery with 13 traditional artists when we first opened our doors to Bangkok in April 2010.

The participators are allowed to interpret the theme in any way they want, or ignore it completely.

The exhibition comprises seven art installations, two photography sets, two video installations and two paintings. The ultimate goal of this exhibition is at all not about the quality or the content of the works, but it focuses on the process of the making as well as perspective and attitude of the creators as well as the viewers. The results have been surprising, ranging from serious social commentary to satirical and lighthearted approaches.

Some of the works reflect or address social issues that are often overlooked. These include the daredevil behavior of bus and taxi drivers in Bangkok, the acceptance and awareness of sexuality, inequality and nepotism arising from the latest political changes, or the passing hysterias created by the 24-hour news cycle. Other participants take a different perspective to art, commenting on the demimonde or the fashion identity of Bangkokians, the endless recycling of the fads of yesteryear, and the so called role of patronage in the arts. Yet another group focus their creations, perhaps more traditionally than many traditional artists, on generating positive energy or finding beauty in the quotidian – accepting, in other words, that the country has changed so it can stay essentially the same.