(detail) is an innovative exhibition that features the work of 118 international artists, each of whom have selected a close-up from one of their paintings. These details have been printed and are displayed together to give both a tantalising glimpse into the individual artworks and create a huge collage of images.

(detail) responds to the unique setting of H Project Space, a traditionally constructed Thai house. The artworks fit into the distinctive wooden framework of the walls and transform the space. Connections between the painting details have been consciously made by the curator as well as being formed serendipitously. Viewers are encouraged to create their own associations and interpretations of the juxtaposition of images.

The show will be re-imagined as it moves from H-Project Space to the more conventional exhibition spaces of Transition Gallery, London and The Usher Gallery, Lincoln. (detail) features a wide range of painters, from the well-established to recent graduates. Their work encompasses abstraction, landscape, figuration and conceptually driven practices and employs a wide variety of mediums.

The close-ups of (detail) allows us to focus on the brush strokes, surface and minutiae of the paintings. This approach is most commonly used for the pages of exhibition catalogues or monographs. The idea of the detail is also something that is particular to the painters’ approach in both making a painting and viewing art in a gallery. The exhibition’s curator Andrew Bracey explains, “In the studio I have found my own relationship to working on a painting is up close to it, with only occasional glimpses of the whole as I step back. This focus on this particular painter’s viewpoint of the painting provoked the idea for this exhibition. This exhibition is an attempt to bring this studio mentality to the gallery. There is a power in the detail, it offers up fresh possibilities for viewing painting.”

A catalogue to accompany the exhibition will be published by Transition Editions to coincide with the exhibition’s launch at Transition Gallery on September 19, 2014. There (detail) runs to October 12, 2014 and will be mounted at The Usher Gallery from December 19, 2014 to April 19, 2015.

The exhibition is supported by Arts Council England and The University of Lincoln, UK. 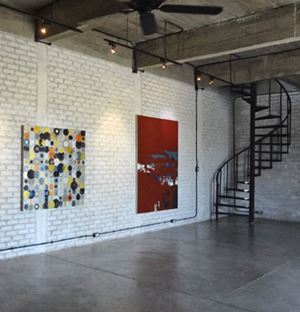