A Boy Who Was Kidnapped By Time 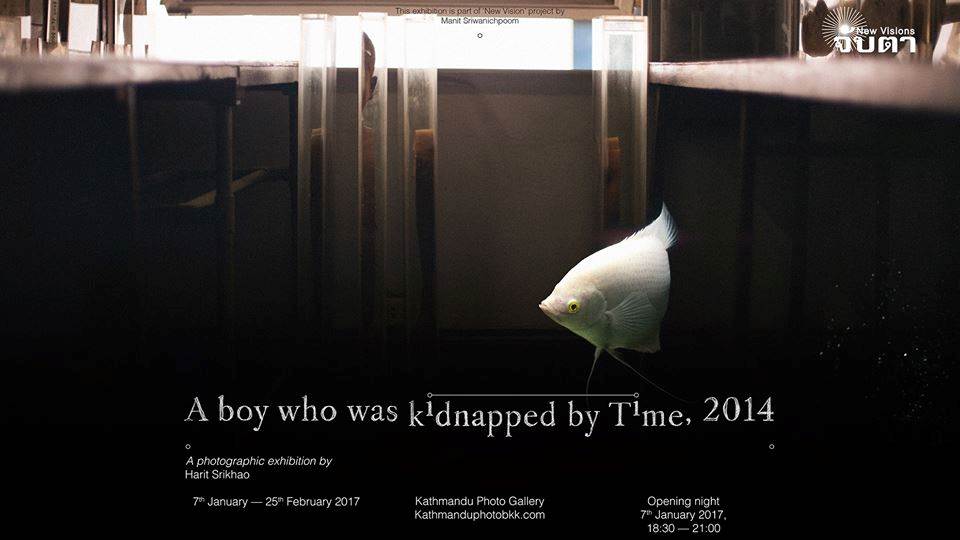 ‘A Boy Who Was Kidnapped by Time’ by Harit Srikhao

A certain eerily dilapidated short-time motel in Suthisarn is a favourite location for filmmakers and photojournalists. The stories they get from it might revolve around the seedy cess-pit of the melodramatic lives of cheap pimps and prostitutes. But for Haris Srikhao, a thoughtful and imaginative photo-artist, it’s a universe that has locked away within its dimensions a haunting childhood memory, of a friend from middle school who had died young—the boy kidnapped by time, who’ll never grow up or grow old.

Multi-coloured fish at the aquarium; Siriraj Hospital’s infamous pickled embryo in its glass jar; the stars floating in space at the planetarium; children playing by the motel’s stairs and lounge. These images come from unrelated sources, but Haris’ control of camera angle and tonality makes them appear to be happening simultaneously in some dim, dark world.

Curator Manit Sriwanichpoom: “Harit is interested in exploring and questioning his own memories. This series strives to create images that would join the past to the present, by connecting the children playing in the motel to the memory of his friend who had died young. It's a brilliant way to convey his sense of loss, his sadness, while at the same time probing the mysteriousness of life. This photo essay gives me goosebumps.”

Harit Srikhao (born 1995 in Bangkok) is a 4th year photography student at King Mongkut's Institute of Technology Ladkrabang. This series was chosen for inclusion in the ‘reGeneration3’ group exhibition at the Musee de l’Elysee (Lausanne, Switzerland), the Format Festival QUAD Galleries (Derby, UK) and the Centro Nacional de las Artes a Mexico. In 2016, his work ‘Heaven Gate’ from the series ‘Whitewash’ was awarded the Barbara Tannenbaum Juror’s Prize at the Filter Photo Festival (Chicago, USA). In 2016 Harit won SCG Young Thai Artist Award in photography.