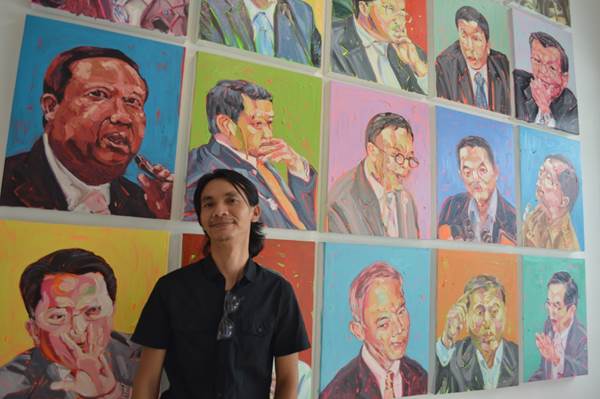 The time in a day, in a month or in a year is the same for all of us. We are all dealt our same share in time, but we cannot say the same for burdens and joy. Happiness and despair have  their various reasons behind them.
Everybody dreams of living in a land filled with joy and peace. We search for it and try to grasp hold of it.
Where does this realm exist? Is it everybody’s wish to live in a nation where happiness and joy are crammed upon its people by those in authority? Or is everyone just moving on with things respectfully and apathetically? Serene honesty as required by the powers that be. These paintings are representations of various stages in different live – the fight and struggle to earn and live. The search for opportunities to increase their happiness. An attempt to reach a level of joy perceived to be convention.
From birth until death, we are affected by the disparity of economics, inequality in education and skewed justice. Willpower is crushed by society in a bent and adulterated system.
You can fervently believe that joy and happiness comes through angels, heavily beings or God, but it comes into being through itself. Joy builds on trains of thought and experiences episodes of learning utility is able to analyze, make adjustments and amendments. Whether a life of grandeur or simplicity, joy is being in balance and good accord with one’s own self.
Even though happiness or distress are emotions, they are strongly influenced by factors such as surroundings, money, society, politics and systems of justice and education. This is without saying what authorities will be in power, how they would gain that power or how much power they will wield.
Whether their hearts are sincere, or their motives for political office are merely for power and benefits which come with position. Whatever their intentions or reasons may be, it is still ineffective at resolving ideological differences.

Lastly, a promise in returning happiness to everybody in the nation is simply propaganda inviting people to have faith and trust in their political regime. Just the way it has always been.