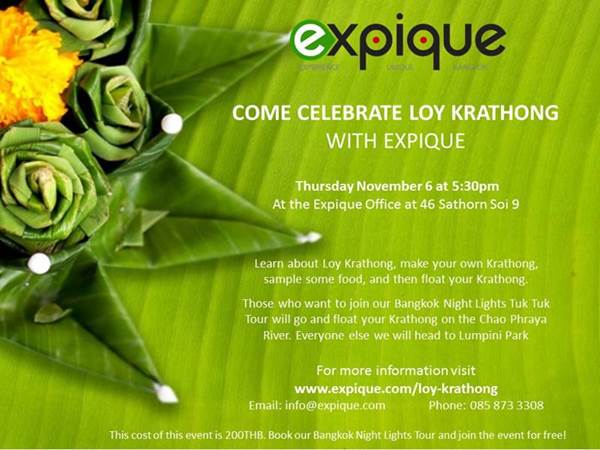 Loy Krathong (sometimes spelt Loi Krathong) is festival celebrated annually throughout Thailand.  It takes place on the evening of the full moon of the 12th month in the traditional Thai Luna Calendar, which usually falls in November. On the night of the full moon, Thais launch “krathongs” on a river, canal or a pond, making a wish as they do so. The festival originates from an ancient ritual paying respect to the water spirits Goddess of Water or “Chao Mae Kongka“.

“Loy” means “float” in, “Krathong” means “basket” in Thai. The traditional krathongs are made from a slice of the trunk of a banana tree but right now there’re many modern of Krathong style such as bread or Styrofoam (we do not like the latter as bad for environment).

To celebrate Expique is offering the opportunity  to come and learn how to make a Krathong with Expique team and then join us to then float your Krathong. The event will start at 5:30pm and our office in Sathorn and there are 2 options:

1) For those who want to join our Bangkok Night Lights Tour, we will make the Krathongs and then head out on the tour where we will stop along the Chao Phraya River to float your Krathong. If you book this tour you are welcome to come make your Krathong for free

2) If you just want to join us for making and floating your Krathong we will head to Lumpini Park at about 7pm to celebrate there. There will be a small charge of 200THB to cover the cost of materials and food.

Come to learn the a truely Thai experience!