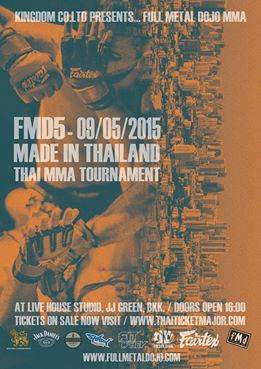 FMD5: Made in Thailand will be FMD’s first Thai-only Amateur MMA event, promoting grass roots MMA development in Thailand. The fighters will be representing the country’s best combat sports gyms, gathering from every region in the land – North, Issan, Central and South – to see who are the greatest warriors in the Kingdom. FMD wants to promote tourism across the whole of Thailand through combat sports training and events, provide a platform for the best up-and-coming fighters to rise to the top and one day represent the Kingdom of Thailand on the world stage. FMD believes that with Thailand’s Muay Thai heritage, Thai fighters can one day become the best MMA fighters in the world in their weight divisions.

The event will play host to 3 4-man Amateur MMA Tournaments for Thai fighters in 3 weight divisions: Flyweight, Bantamweight and Featherweight. Each tournament will consist of two semi-finals bouts, the winners of which will face each other in the finals later that same evening. And for the winners of each tournament, each fighting to victory twice in one night, awaits not just the glory of victory and a career in MMA, but a cash prize to be awarded on the night. And there will also be 2 professional MMA Super Fights on the card.