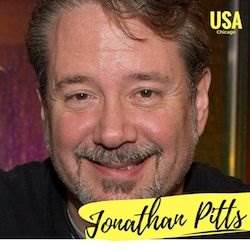 We are grateful to have Jonathan Pitts give a workshop at the Bangkok International Improv Festival.

Jonathan Pitts is an award-winning international improv theatre artist from Chicago with over 30 years’ experience. He’s a creator, director, improviser, producer, and teacher, and he’s also the Founder and Executive Director of Chicago Improv Productions.

He co-founded the Chicago Improv Festival and produced it for 20 years. He created and produced the College Improv Tournament for 10 years. He was Teen Comedy Fest’s executive producer for 7 years. He’s also the founder and producer of Chicago Podcast Festival for the past 2 years.

He has taught and performed internationally in 12 countries, as well as all over America. He’s performed in over 1,250 improvised shows. He has created the improv shows, “The Make ‘Em Ups”, "The Oracle", "The Silent Movie", “Solo Plus One”, “Stopwatch”, and "Storybox Unscripted Theatre".

He taught at The Second City for 16 years and he’s a contributing writer to their book on improvisation. He taught story-based improv at Piven Theatre Workshop. He’s also taught at 25+ American cities at regional improv fests and improv theatres.

For 3 consecutive years he was selected by New City magazine as one of "Chicago's Top 50 Theatre Players" and he’s been interviewed about improvisation in books, newspapers, online posts, podcasts, radio, and TV.

Chicago is famous for grounded, honest, relationship-based improvisation scene work that produces deep laughs and deep sighs as the audience is moved to both. This style of work requires acting, listening, openness, patience, and responding through a shared process of give and take. This workshop will feature a deep dive into this process of two-person scene work that will bring improvisers discovery upon discovery. As those shared discoveries pile up, the improvised scene becomes deep, full and funny. It's the Chicago way.

This workshop is about 4 hours and seats are limited. Act NOW and reserve YOUR space.