CRAFT sukhumvit 23, is taking over the whole complex including the parking area, turning it into Asoke’s water-free family friendly and pet-friendly party zone. CRAFT 23 will feature DJ MAXXX spinning summer tunes and song requests from 4pm till late into the night Friday, Saturday and Sunday. Along with CRAFT’s 40 taps of craft beer, there will be a Chang beer booth to provide a bevy of libations for the thirsty, and a Jameson sponsored fun area and booth serving shots. Slanted Taco will be serving their kickass mojitos and margaritas for those looking for cooler, sweeter alternatives.

This year CRAFT’S popular BBQ menu is back on with a Hot Dog bar, juicy burgers, great beer snacks and the best Mexican street tacos from Slanted Taco.

Both locations a few minutes walk from the BTS.

About CRAFT
CRAFT has the largest collection of craft beer on tap in Thailand with 60 taps. 40 Taps are at CRAFT Sukhumvit soi 23 and 20 Taps are at CRAFT Silom. CRAFT ‘s beers menu is constantly rotating so that there is always something new to try. CRAFT has a monthly Tap Takeover allowing 1 single brand of craft beer to take over 2-5 taps at our venues. CRAFT serves burgers, pizzas and Thai food as well as our famous pastrami sandwich. CRAFT often hosts birthday parties (50+PAX), Company events (200+PAX), Office christmas parties (20+ PAX). Every year CRAFT hosts its annual Songrak Festival with over 300+ PAX. CRAFT Silom is located in the heart of Silom under the Holiday Inn Silom 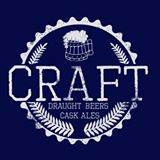